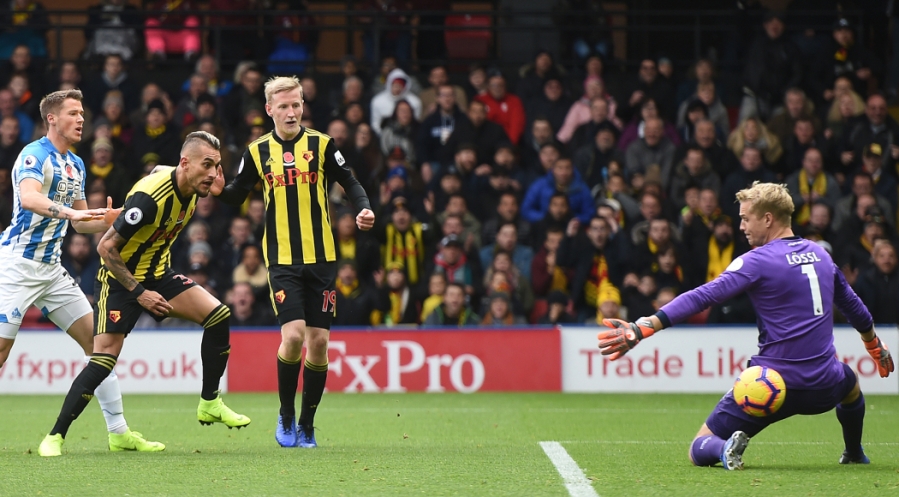 The thin veneer of improved performances relative to last season’s corresponding fixtures, an already rather desperate trope put forward by Pollyanna match reporters read by a few hundred devotees, was comprehensively shredded by a disastrously poor display against an inventive, pace laden Watford who had the game won within 20 minutes and left kicking themselves for not substantially improving their goal difference.

Honourable defeats, battling draws and luckless pursuits of points count for nothing if opportunities against the less than behemoths are spurned as unprofessionally as they were at Vicarage Road.
Even during a dominant, encouraging first 10 minutes which saw Town retain possession and cause their hosts problems with a good raid down the right, a subsequent corner which lead to Mooy bringing the first of 3 good saves by Foster and a Pritchard effort which curled just over with the former England keeper rooted, there were signs of fragility which were to be easily exposed by the home team.
Zanka, who struggled throughout, along with Schindler, with neither being able to control the muscularity of Success, set the tone for the opener with an attempt to win the ball 30 yards out which barely merited being described as a challenge but, in contrast to what was to come, was reminiscent of Moore on Pelé.
Watching live, Pereyra’s run in to the heart of Town’s defence looked mesmerising and jinking. Replays exposed the ugly truth – the Argentinian barely had to do anything other than run in a straight line through laughably weak dangling legs of several defenders before poking the ball past an apparently uninterested Lössl.
If just one in attendance had attempted, let alone completed, a regulation block or tackle, the danger would have been snuffed out without anyone having to mention the incident again, but the incomprehensible waving through put the visitors one down and gave the hosts a timely boost after 10 minutes of, well, not much.
Lacklustre up to that point, Watford’s confidence was given a platform and with several individual talents they were handed permission to express themselves. Their confidence, particularly after the break, often translated in to over playing but the result was in little doubt once the second went in.
Deulofeu was released down Watford’s right and he skipped past an ill advised lunge by Löwe before surging past Hogg who couldn’t tackle for fear of conceding a penalty. The Spaniard crashed a powerful shot between Lössl and his near post.
The shot was as ferocious as Lössl’s positioning was weak. In stark contrast with his opposite number, who made a solid save from Mooy, a spectacular if fairly routine save from a Billing drive and a fabulous tip on to the bar from a great Löwe effort, Lössl’s application looked distinctly weak. He may not have been at fault for the events which lead up to both goals, indeed he is entitled to expect much more from those in front of him, but it is difficult to think of a single game where the Dane has made any sort of difference so far.
A late corner saw Depoitre, who bundle about to little effect, win the ball in the air and see his header squirt sideways towards corner taker Mooy. It failed to meet even that unintentional objective, capturing the season long failure of our strikers in a nutshell.
Other than the 2 goals, intermittent sloppy passing and the pretty overwhelming evidence that Mbenza isn’t, and may never be, ready for this level, Town performed reasonably well at times and, at least, had viable efforts on goal. But this is akin to asking Mary Todd Lincoln her view of Our American Cousin.
The second half was a horrible, inexcusably shambolic display and a walloping was only avoided because of Watford’s aforementioned showboating tendencies.
Early on, a misplaced pass by Zanka – perhaps still fantasising about a move on to the top 6 or maybe a European giant – saw Deulofeu miss a glorious chance with Town entirely exposed and more were to be spurned, including a virtual bass pack to Lössl from 6 yards.
Watford’s movement and invention, even if over elaborate at times, caused regular panic and the lack of any sort of composure in the Town defence saw them invite increasing pressure as the performance deteriorated from lame to amateurish.
When Schindler knocked Success over with 10 minutes to go, an innocuous free kick turned in to Watford’s third as Löwe was exposed for pace by Femenía who crossed for a well deserved Success success.
In truth, the game had been over for a long time. The genuinely, if sporadic, threatening attacks from Town in the first half had been replaced by forward play groaning under the strain of tortuous progression and posed little threat. Mbenza had a decent shot easily saved by Foster following a pull back by Mooy, but the visitors’ execrable scoring stats were never likely to be improved.
With Billing disappearing, Mooy struggling and Depoitre redundant, forward momentum was limited and defensive frailties always on the edge of exposure. In and amongst the gloom, Hogg can hold his head high but few, if any, of the others will look back and believe they helped the cause. Pritchard tried hard, at least.
There were many away performances like this last season, but any progress made in recent games took a major step backwards and a resolution to our problems in front of goal look as far away as ever. The last thing needed was a resurgence of sloppiness and downright unprofessionalism at the other end.
On their day, and they have had quite a few so far, Watford are a very good Premier League team, but to gift them the points in the manner Town did is unforgivable. The return of Kongolo can’t come soon enough and Mbenza made you yearn for Van La Parra who didn’t even make the bench with – checks team sheet while rubbing eyes – Quaner preferred.
Next up is freestyle Fulham with their leaky defence. Sounds like a recipe for disaster.