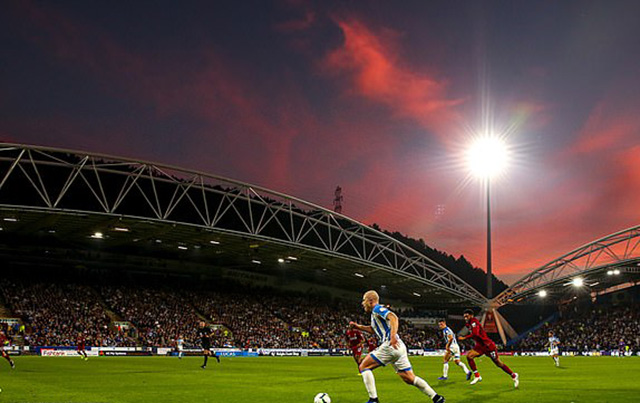 As the exhausted players slumped to the ground after another, undeserved and cruel defeat, the overwhelming, genuine backing they received from a disappointed but hugely proud home support – deprived of a goal deep in to October – must have strengthened their resolve in their search for victories.

In stark contrast to last season’s weak submissions to Klopp’s men, only the now ubiquitous absence of even a small slice of fortune and the not unexpected denials of a penalty and goal which, had they taken place at the other end, would have triggered the big club rule, stood between a very good, unrewarded performance and the point they deserved.

Liverpool is blessed with an outrageously talented squad, and, man for man, they are technically a few steps above a Town side who have to compensate with unity, supreme concentration and planning. On a gorgeous late Autumn evening – for all the miserable, grey winter days at the stadium, there are few more beautiful sights than a sunset over our ground – the inherent imbalance was very nearly levelled as the struggling home side regularly interrupted the fluidity and often lethal passing and movement of last season’s Champions League runners up.

While the second half never lived up to the pulsating events of the first 45 minutes, the home side’s performance belied their lowly position. Disrupting high flying Liverpool is far easier said than done, and the physical and mental qualities needed to achieve it are quite daunting but with aggression, belief and massive effort, Town matched their storied, illustrious opponents in all but the final score.

Despite looking off colour for long periods, perhaps a mixture of their opponents’ relentless energy and a dip in their own high standards, Liverpool took advantage of rarely conceded space when Gomez found Shaqiri with a ball which squeezed past two home players leaving Town short at the back. The Swiss played in Salah who was half a beat quicker than Schindler and able to place his shot wide of Lössl for a barely deserved opener and eventual winner.

The goal took the lid off a game which had rather sauntered along to that point, and it was the home side which made most of the running. Defending stoutly when necessary but not desperately which was so often the case against the top teams last term, Town began to worry the visitors with raids down both flanks culminating in the two incidents which ultimately determined the direction of the points.

Yet again, an upright was found by Hogg’s beautifully struck shot from outside the area with Allison well beaten but that small margin which continues to separate us from points we deserve paled in to insignificance against the injustices of not being awarded a clear penalty when Milner’s flailing arm redirected the ball and Pritchard not being given the benefit of considerable offside doubt.

Had either of these decisions gone the home side’s way and an equaliser achieved, the game may have taken on a different shape and changed Liverpool’s conservative approach to the second half, but it doesn’t change the fact that the Terriers simply aren’t getting the rub of the green at crucial moments.

An excellent free kick from Billing flew just wide too and the attacking intent, particularly down the right, more than suggested that the identity we have rediscovered in the past few games isn’t going to be lost against even the most talented opposition.

Klopp’s contain and counter tactics in a less entertaining but no less committed second half saw Town having to try to pick their way through a high quality defence while avoiding being sucked too far up the field which rather dulled their efforts in the final third.

An on form Liverpool would have made much more of two or three lightning counter attacks which were either thwarted by last minute challenges or uncharacteristic hesitations, but their forays were sporadic and the intense pressure which often breaks the spirit of opponents through overwhelming force was notably absent.

For all their efforts, Town’s only reward until the final minutes was a Depoitre header comfortably saved by Allison, but Hogg, Mooy and Billing easily matched the visiting midfield and, for the most part, possession was maintained with some comfort even if it rarely resulted in danger to the Liverpool goal.

The chance did come along, however. What appeared to be another innocuous cross was badly dealt with by Van Dijk and the ball looped up for Mounié to fire over when he really should have done better. In his defence, the ball fell quite awkwardly and the presence of Depoitre may have put him off (why are we relentlessly repeating the failed and desperate looking dual striker approach when behind?) but it was the type of chance you have to convert at this elite level.

With the miss, Town’s chance of a deserved point went. There were moments of potential in the last ten minutes, but the blocked shots of Mooy and Depoitre and a miss from Zanka following good work by substitute Diakhaby didn’t constitute golden opportunities.

At the other end, Salah shot wide when in an arguably more advantageous position than for his goal while Firmino (yes, they brought him on as a sub!) fired over from another good spot.

As with most encounters this season, barring the capitulation of a scratch side at the Etihad, the direct comparison with the same game last season was very encouraging. It would be self deluding to deny that Liverpool were not at their best (even if the home side had a lot of influence over that) and the absence of some of their even more talented players did not level up the contest to an extent, but there are many positive to take from the game.

Durm is improving all the time and looks to be an excellent addition, our midfield looks settled and more than competent, we were defensively excellent for large swathes of the game and the identity and belief remain intact despite the absence of any sort of good fortune.

Town fans can be a miserable bunch if they don’t believe players are good enough or lack effort – the volume, intensity and persistence of support created a magnificent atmosphere which has become unique in the Premier League, and the numbers staying behind to applaud the exhausting efforts of all the players tells you everything.

Instinctively, we understand how difficult is the challenge for Wagner and his squad, but while ever they produce displays as committed and good as this, we will continue to back them. Wagner himself absolutely gets this – his post match comments about fans still backing the team who haven’t scored at home for a long, long time were genuinely felt. We know the context of the infernal statistics even if the highly paid, sometimes offensive, talking heads on radio and TV clearly do not.

We may well be relegated, but recent displays suggest that an upturn and a committed fight are coming. Keep patient.

2 thoughts on “Town not walking alone”