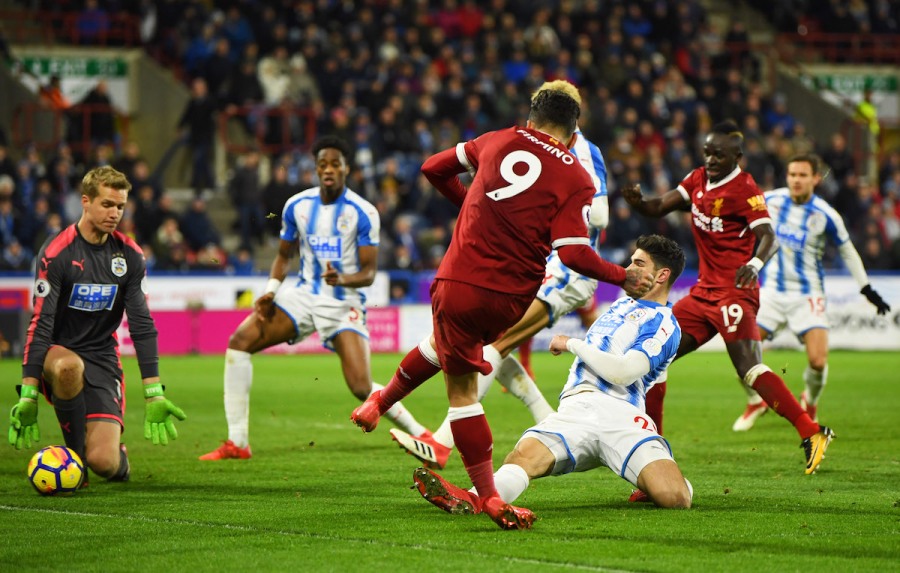 It would seem that David Wagner decided that experimentation was in order against a side where the chances of victory, or even parity, were slim enough to take a chance with the longer view in mind.

Deploying three central defenders and twin strikers, the manager’s thoughts seem to be on a block of 6 or 7 games after Old Trafford which will determine Town’s fate in an increasingly difficult season where a sprinkling of quality is proving insufficient to overcome the limitations of a fundamentally Championship squad.

This thesis may well be wide of the mark – we shall never know unless he opens up at the conclusion of the season – but you only need to look back at the final stages of last season to believe it is plausible.

The results were mixed, to say the least. While all 3 central defenders played well and restricted Liverpool’s hugely talented strike force reasonably well, it is unlikely that we shall see Mounié and Depoitre start a game together again. Unlike the defensive trio, the forwards displayed precious little understanding of each other and neither contributed enough to the team (unusually for Depoitre, less so for Mounié). Wagner was probably right to spare Pritchard the ordeal and possible neck injury given that any attacking resistance was largely aerial – it simply wasn’t a game suited to his skills.

The visitors were, perhaps unsurprisingly, far too good for their hosts. With crisp passing, excellent movement and sublime touches they were able to put recent travails firmly behind them. This was especially so in a hugely dominant first half which gave them a two goal cushion and the near certainty of victory allowed them to coast in low gears for much of the second.

Rarely in any sort of trouble, Liverpool quickly regained possession on the odd occasion they lost it as Town found it almost impossible to transition from the passivity of defending to the activity of attacking, or even a semblance of control, and the visitors’ effortless command of proceedings was barely interrupted.

At wing back, both Löwe and Hadergjonaj played pretty well, particularly the Swiss, and though both suffered from the team’s overall malaise in possession and going forward, it wasn’t difficult to imagine them being more successful in less challenging circumstances.

The central midfield, however, was a bit of a mess for much of the night. Mooy’s form remains in the doldrums and unless the Australian can recapture his game controlling form the fears over relegation will become a certainty, while Billing’s anonymity in a game which passed him by on the whole could be excused by his lengthy absence through injury. Hogg rattled in to a few decent challenges and though his man of the match accolade was more than generous of the sponsor, his effort couldn’t be faulted.

Despite their superiority, after establishing almost complete control from the very beginning, Liverpool rather flattered to deceive in the early stages and their monopoly of possession created little in the way of threat with Town’s deep defensive block coping comfortably with the Reds’ advances.

In fact, Town could have taken the lead if Depoitre hadn’t arrived slightly too late to meet an excellent Löwe cross in their first attack just after the quarter hour.

While taking the lead at that stage wouldn’t necessarily have changed the outcome of the game, it would have put pressure on the visitors given recent results, and barely 10 minutes later a deflected effort by Cam was nestling in the home net and the result was never beyond doubt from that moment.

Town had another chance which would have drawn them level – entirely against the run of play – but Löwe’s curling free kick was just wide of the target.

Most of the half, however, was relentless Liverpool possession and control with Town largely incapable of gaining and retaining the ball and momentary loss of concentration in first half injury time which allowed Firmino to beat Lössl at his near post extinguished any realistic hope for the Terriers.

Even the most optimistic home supporter knew that the game was lost by half time though, to their credit, they continued to support the team throughout despite having precious little encouragement from the pitch.

Playing within themselves, at exhibition pace for much of it, Liverpool continued to dominate in the second half with minimal exertion and some peerless quality at times.

Mané twice found himself on the end of pinpoint crosses but failed to convert either, while the outrageously talented Salah, who combines great skill with no little work rate, was frustrated by blocks and the side netting. Milner forced a save from Lössl and it seemed just a matter of time before Liverpool put the game to bed (after already tucking it in by the break).

The introduction of Quaner for the entirely ineffective Mounié did, at least, inject some much needed energy for the home side – Liverpool’s central defenders were discomforted for just about the first time and the momentum culminated in a penalty appeal which, while soft looking, was as worthy as the one Kevin Friend (who managed to turn what should have been an easy night for a referee in to drama) gave to Liverpool shortly afterwards.

Salah converted that to put a deserved gloss on the Reds’ victory and they saw out the game with little trouble. Ince, a late substitute, had one effort off target but a consolation was not to be.

Overall, the home display was disappointing though they defended pretty well despite the score line and Kongolo’s full Premier League debut carried some hope for games against teams of far lesser ability than Liverpool, Schindler was excellent in the middle of the three and Hadergjonaj continues to impress.

The team selection for the next, equally huge, challenge at Old Trafford will be interesting. It wouldn’t be much of a surprise if Wagner uses the occasion for further experimentation before the crucial mini season which will decide our fate.