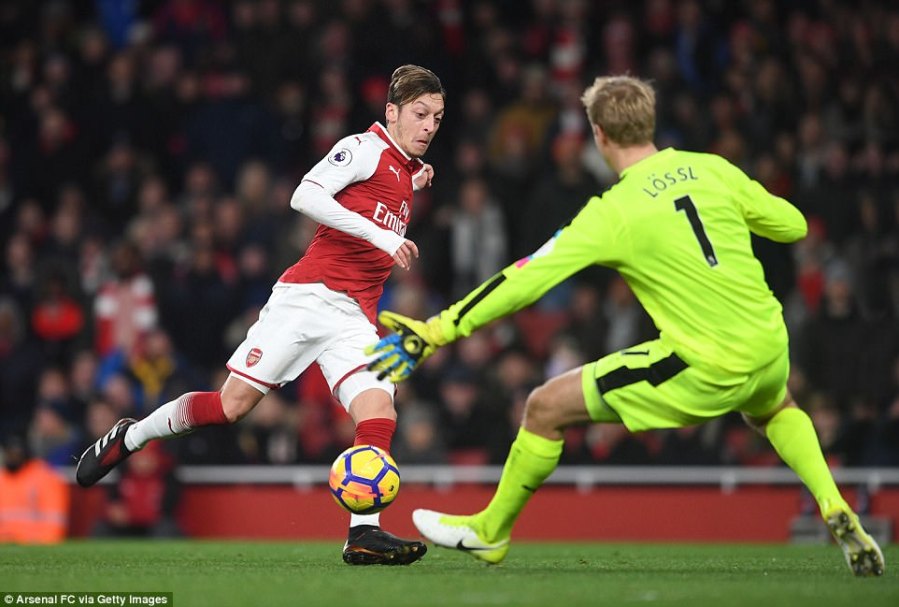 Nobody said it would be easy. Quite the opposite.

Faced with 3 games in 6 days, including two huge physical and mental challenges pitting an inexperienced, thin squad against an array of world class players, David Wagner’s pragmatism came to the fore with a team selection showing 6 changes from the admirable effort against Manchester City (with one enforced).

Wagner, rightly, always says that he trusts every one of his players and all will be needed across the season, but the team sheet betrayed that both of his eyes were on the more winnable trip to Merseyside on Saturday (he wasn’t to know that Everton would be galvanised by the presence of Big Sam).

Within 3 minutes, his gamble backfired as Town gave up far too much space and allowed the excellent Ramsey to feed Lacazette with a touch which would have bamboozled the best of defences.

At this point, it was clear that Town would lose. The ability to recover has been largely absent throughout Wagner’s tenure; a source of constant bemusement. Added to that is a propensity to collapse once games are deemed to be beyond them. Wagner’s teams – and we have enough range to judge – slump alarmingly in adversity.

It is, on its face, preposterous to criticise the German – a relatively inexperienced but hugely charismatic and intelligent coach who creates miraculous results with relatively thin resources. However, both of these flaws seem to be accepted or, at least, are not being addressed successfully.

Had collapses and failure to recover only occurred when faced with the quality of an Arsenal or Liverpool, it could be looked upon more sympathetically, but the examples are abundant and cover a wide range of opposition in 2 divisions.

To their credit, Town’s undoubtedly weakened team responded reasonably well to Arsenal’s early strike, though for the first half hour the home side dominated and their comfort on the ball was spellbinding at times. However, they created relatively little and wasted what half chances came their way.

A decent shout for a penalty was, predictably, waived away as Mustafi collided with Mounié in the area and the visitors enjoyed more parity with their illustrious hosts in the final quarter of an hour of the first half. Both Mounié and Quaner had efforts blocked – the former delayed his effort too long and an earlier strike may have proved fruitful, while the latter’s effort was impeded by clumsy control.

Mounié forced a regulation save from Cech as Town finally pressed higher up the pitch and disrupted Arsenal’s control of the football – despite an evident, nay yawning, gap in individual quality, the latter stages of the first period offered some hope for the goal starved away support who gave the team the usual loud support.

Encouraged, the visitors followed up their encouraging spell with an even better one in the early part of the second half, but they had to repel some early Arsenal pressure which saw Özil’s shot blocked by Cranie.

The turning point of a game in which Town had become increasingly competitive came when Quaner was unable to beat Cech from a hugely promising position. It was a good save but the type of chance that must be scored if we are to avoid a rapid descent towards the bottom. Mounié also had a shot blocked with Cech slapping the deflection on to his own bar with an unorthodox piece of goalkeeping.

Perhaps stung in to action by the Yorkshire upstarts, the Gunners then took complete control as Town slumped to a heavy defeat following three goals in just four minutes as the hosts produced some scintillating football to inflict harsh punishment on the demoralised Terriers.

The floodgates opened as Özil and Sanchez combined with devastating affect to set up Giroud – who had replaced the injured Lacazette and had already hit the post earlier in the half with his first contribution.

Immediately from the kick off, Arsenal won possession, took Town apart down the right and fed Sanchez for the third.

Within minutes, the red and white shirts were swarming all over again and a lightning fast move freed up the impressive Özil to grab a fourth.

The demolition of Town’s resilience was frightening; Arsenal’s pace and precision was a joy to witness despite the pain felt in the away section and with nearly 20 minutes left, greater humiliation looked inevitable.

While the visitors held out for ten minutes, they could barely get on the ball never mind retain possession and with Arsenal free to express their considerable talent – their three substitutes were Giroud, Wilshire and Welbeck (Town responded to the last 2 named with Dean Whitehead!) – a fifth was inevitable. Giroud grabbed it but it was mainly down to some outstanding work by Kolasinac which set up the French international.

Arsenal’s sublime quality following the scares at the other end cannot be denied, but they were helped in no small way by Town giving up the ghost once their chance of an unlikely result disappeared and the capitulation was greatly worrying.

With Mooy somewhat off his game since returning from his global travelling, Hadergjonaj not being able to cope with a defensive wing back role and Mounié proving much less effective as a lone striker than Depoitre, it was something of a miracle that the visitors survived for so long, but the opportunity to put some pressure on the Gunners with an equaliser was missed and simply served to wake them up.

The lack of goals, especially but not exclusively, away from home is now an acute problem and one which will start to test the patience of those who travel and provide great support – it must be solved, and soon.

There is no disgrace in losing at the Emirates – Arsenal have won their last 12 home games now and came in to the match with a morale boosting victory over their hated neighbours – but the manner of the collapse was alarming. Being competitive for 70 minutes is commendable, as was the performance at the back end of the first half and the early period of the second, but there is no excuse for the lack of fight following Arsenal’s second.

Wagner’s changes were also understandable, but the lack of depth at his disposal was cruelly exposed as the goals flew in.

Character is going to be needed to quell their next opponents who will be responding to the appointment of Allardyce and newly confident after demolishing West Ham. Everton will believe that their horrible start is over and will undoubtedly see a home game against a non scoring, newly promoted Huddersfield Town as the perfect game to continue their revival.