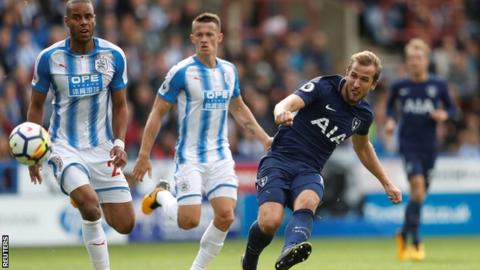 A mixture of individual mistakes, some top quality opposition and a rather large dose of naivety condemned Town to the first, and probably not last, heavy defeat of the season.

The visit of Spurs, boasting fine players in all positions and exceptional ones in some, represented the toughest assignment by far of a campaign where challenges come in all shapes and sizes. Town’s first steps have been promising if not wholly assured against largely mundane opposition and built on defensive resilience in the absence of offensive threat.

Moving Ince in to the number 10 role instead of the inexperienced Sabiri, with Van La Parra restored on the left was a fairly obvious choice for David Wagner, but the injury to Palmer is beginning to hurt his plans as neither understudy possesses the Chelsea loanee’s power and, hard working as he is, Kachunga has so far failed to convince on the right where Ince should be.

Tottenham’s system of 3 central defenders and two highly mobile wing backs presented the home side with conundrums they were never able to adequately resolve and with Mooy being largely neutralised from influence, it proved to be a long, often chastening, early afternoon for the Terriers who, nonetheless, did contribute to an entertaining first half.

The visitors started strongly, forcing a corner from their very first attack but gained nothing from it nor from a free kick following a Zanka foul on Eriksen.

Town also imposed themselves on the game early with a good effort by Smith beaten away by Lloris the high point of some promising attacking. The pressure produced a corner on the left following an Ince shot taking a deflection, but, rather cruelly, this was to eventually lead to the Londoners’ first goal.

There seemed little danger as the ball came back to Lössl to clear, but the Dane’s attempt to avoid offside players on the right saw him rather shank the reverse ball he intended for the left wing. A straightforward header by Trippier should have been comfortably dealt with by Löwe, but he misjudged it dreadfully and Kane was in the clear behind him, marginally onside.

The in form (to say the least) England striker strode in to the box and beat Lössl with some ease to extend his remarkable scoring run and all of Town’s early promise was upended by one error and the marksmanship of Kane.

To their credit, Town continued to take the game to their illustrious opponents and strong appeals for a penalty when Kachunga seemed to be pushed in the back in the area were waived away. More joy down the right led to crossing opportunities which were woefully spurned or misdirected and the contrast between the two teams in the final third couldn’t have been more stark.

Spurs’ second goal owed something to fortune but the crisp interplay which unravelled their hosts in the space of seconds between the halfway line and the edge of the box before Löwe inadvertently directed the ball towards scorer Davies was of the highest quality.

Demoralised, the visitors should have gone further in front when Lössl, whose previous assurance seemed to desert him throughout the game, kicked fresh air as he attempted a clearance under mild pressure from Kane and was hugely fortunate that the centre forward’s poise temporarily deserted him allowing the Dane to smother his attempt at rounding him.

Spurs threatened to run riot at this point and stripped their hosts bare again before Dele Alli hit the post when appearing certain to score and the Premier League newcomers were in severe danger of being badly embarrassed.

The third goal arrived before the half hour mark as Kane produced a solo goal of stunning beauty and simplicity. Effortlessly rolling the attentions of both Zanka and Schindler, he curled a perfectly executed shot past Lössl, doubling Town’s goals against column

With the ball, however, the Terriers were still capable of decent play but without asking enough serious questions of their opponents’ back line and delivery in to the box continues to be a major issue for all of the wide players with some sailing behind harmlessly. With the massive frame of the impressive Depoitre to aim at, the profligacy is becoming unforgivable.

The highlight of the whole game for comprehensively outplayed Town came from a surging and powerful and run by Depoitre, reminiscent of Kindon at his finest before the Belgian fired a mighty shot against the bar with Lloris beaten.

Coming just before half time, a goal may have changed the tenor of the contest though this would more likely have resulted in Spurs slipping in to a much higher gear than the one they adopted in a largely pedestrian second half.

Though thoroughly chastened by the manner of the goals conceded, particularly the first two, Town had contributed positively to an entertaining 45 minutes which had seen class prevail over honest endeavour. The crowd seemed to accept the limitations of their team in the face of such superior quality, applauding the effort if not the execution. While some unrealistic souls may wonder how Town failed to quell a forward line valued in the hundreds of millions, most accept that a team destined to finish top 4 would have to be seriously under par not to put a relative minnow to the sword.

Kane’s majestic strike and menacing threat was a privilege, if not entirely pleasurable, to witness. Eriksen was also sublime – his awareness of space and teammates were an education to see live – and Pochettino’s trademark style hugely attractive even at a lower tempo than his team usually achieves.

The second half was pretty forgettable in comparison. Town tightened up and were more effective in denying space but at the expense of producing any threats of their own, while Spurs contented themselves in easy possession with the occasional flash of flair – to the credit of Zanka and Schindler, they acquitted themselves much better and the learning experience should be valuable.

An injury time fourth was a little rough on Town but the type of error made upfield by Kachunga, who had a day to forget, will be punished by a team with Tottenham’s ability on the break. To his credit, Kachunga chased back all the way to help out but Sissoko scrambled the goal in via Schindler to put a gloss on a comprehensive victory.

In between times, Alli dived and was booked (his attempt was possibly more laughable than Van La Parra’s at Burnley), Kane left the field to applause form the home side – a rare event which has riled some but delighted others as an expression of sportsmanship and the home crowd continued to enjoy themselves defiantly in the face of a heavy defeat.

Decent cameos by Billing and Malone may hint at changes for the next game, with the former looking assured in possession and progressive in style.

David Wagner’s teams have never been immune to the odd hammering – when the plan goes awry it can fall apart pretty spectacularly – so it wasn’t a great shock that a highly talented team could emulate Fulham and deliver a beating.

Lessons need to be learned, and they will be, as it will not be acceptable to capitulate so easily in the face of high quality from the top 6 every time we face the challenge, but despite the score line, despite some disappointing performances – Löwe appears to be in a slump and Mooy was unable to dictate play for all but a few moments and the wide men simply failed to do their jobs properly – and despite cruel reality finally hitting home, the experience was still (sort of) enjoyable.

Hopefully, the enforced break will allow Wagner and his staff time to get some players fit for Swansea away – a game, in the scheme of things, of more significance than the glamour on show against Tottenham.