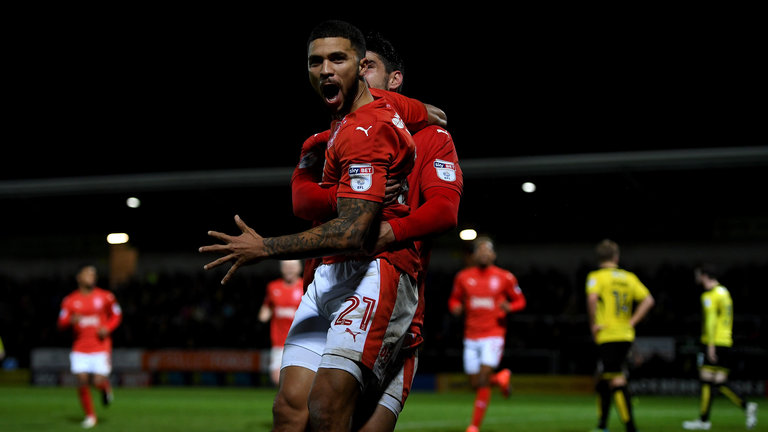 Over 20 minutes in to a dour, physical battle in a tight, cramped arena, Aaron Mooy finally registered a successful pass and there could be no more stark illustration of the lack of room available to the visitors and the severe restrictions this imposed upon them.

The Aussie improved as the game progressed, but even his mastery of space was severely tested as an energetic if limited home side demonstrated how they have turned their tiny, efficient ground in to a graveyard of ambition for many sides as they have made their remarkable rise over the past few years.

With 4 changes made from Saturday’s morale boosting win, Wagner introduced graft in an attempt to counter the stifling and aggressive style of Burton who present a unique challenge in a Championship dominated by clubs with resources ridiculously in excess of the Brewers’ wildest dreams (and, to a lesser but important extent, ours).

While there could be few complaints about Town’s resilience in a truly turgid first half – Burton managed one, easily saved shot on target, which was one more than the visitors – there was precious little connection between the component parts of the team and attacks floundered weakly on the rare occasions that the shackles were loosened.

Bunn and Billing spurned the chance to impress with rare starts. The former struggled with the lack of pitch width and the young Belgian’s languid style was barely suited to the frenzy all around him.

In contrast, the two replacement full backs Holmes-Dennis and Cranie acquitted themselves more effectively, particularly the veteran who became Town’s most effective performer and, eventually, just as much a match winner as Wells. In a bruising encounter largely bereft of entertainment, Cranie added another fine display to the one at Blackburn (in very different game circumstances) and he should surely be utilised much more on the right hand side (including centrally) of a defence which can be vulnerable.

The best that can be said of an entirely incoherent first half performance which vied for the worst 45 minutes of the season was that Town didn’t allow their complete lack of control to hand the game to their opponents. With no fluency, and possession overturned far too regularly, it was incumbent on the defence not to succumb and the whole back four were comfortably up to the challenge.

Eerily reminiscent of the Shrewsbury debacle in the League Cup, where a low energy display in similar surroundings was punished, the fear was that Burton – a far superior side than the Shrews – could turn the screw in the second half and galvanise their impressive home form; and so it was to prove.

With possession at a premium, Town rarely escaped the constraints of their aggressive and confident hosts who make up for a general lack of finesse by harnessing raw power to create opportunities. As they were in that cup game, Town were way outside their comfort zone and were forced in to an ugly resilience which could, and probably should, have been breached on several occasions.

A rare foray upfield which saw a Kachunga effort cleared off the line offered brief respite from Burton’s relentless momentum and the visitors had to strain to resist their far more progressive hosts.

Billing and Bunn’s disappointing nights were brought to an early end before the hour with Van La Parra’s unpredictability carrying far more threat and Palmer adding greater strength to an over worked midfield.

Schindler and Hefele, who had largely worked in harmony in the first half, started to become a little detached and pressure began to mount. While there was more sound and fury signifying nothing about much of Burton’s dominance, Town were grateful for a miscontrol by Dyer when put through and even more in debt to a fantastically timed block by the excellent Cranie.

Hefele, increasingly erratic, survived a hand ball appeal which, while rightfully turned down, caused palpitations for supporters well used to such decisions going against their team.

Pinned back and rarely composed, Town’s only outlet was Van La Parra who worried Burton far more than Bunn even if little came from his forays and a battling 0-0 draw seemed to be the height of expectations.

With the foul count mounting, a decent referee began to reach for his pocket regularly and had to deal with simmering feuds involving Hefele with Ward (whose snide transgressions have not reduced with his status) and Kachunga with Burton’s whole left side.

The interruptions benefited Town by relieving pressure – in open play, Burton looked by far the most likely to grab the winner – but they remained largely on the back foot until a foul on Kachunga gave Town a routine, midfield, free kick which seemed at the time simply an ideal opportunity to get the ball far from our goal with just 5 minutes left.

Mooy, who had covered a lot of defensive ground in a much improved second half display following an uncharacteristically slack first half, whipped in a decent ball towards Hefele. Jumping with 2 defenders, the German’s touch looped towards his compatriot Schindler who headed towards the back post.

Wells, whose performance had ranged between poor and missing, rose high above his marker and generated significant power to beat the keeper. It was a very good finish and a distinctly below par Town were about to mug the home team for 3 wholly undeserved but welcome 3 points.

Unsurprisingly, Burton lost most of their verve with the late setback and it was Town who should have put the contest beyond doubt in the final 10 minutes (including injury time) with a Kachunga burst only halted at the last minute – he should have shot earlier – and McLaughlin beating away a Wells effort after being put through by Palmer.

The tightly packed away terrace celebrated with the players in customary fashion, and all of them, the players and the management may have felt a tinge of embarrassment at the nature of the win, tempered by the fact that there has been precious little luck flowing our way over the past few weeks.

A very different, very yellow, challenge awaits in front of the Sky cameras on Friday night but what, on paper, looked a far more daunting task may well be welcome relief following a very uncomfortable night in Burton.